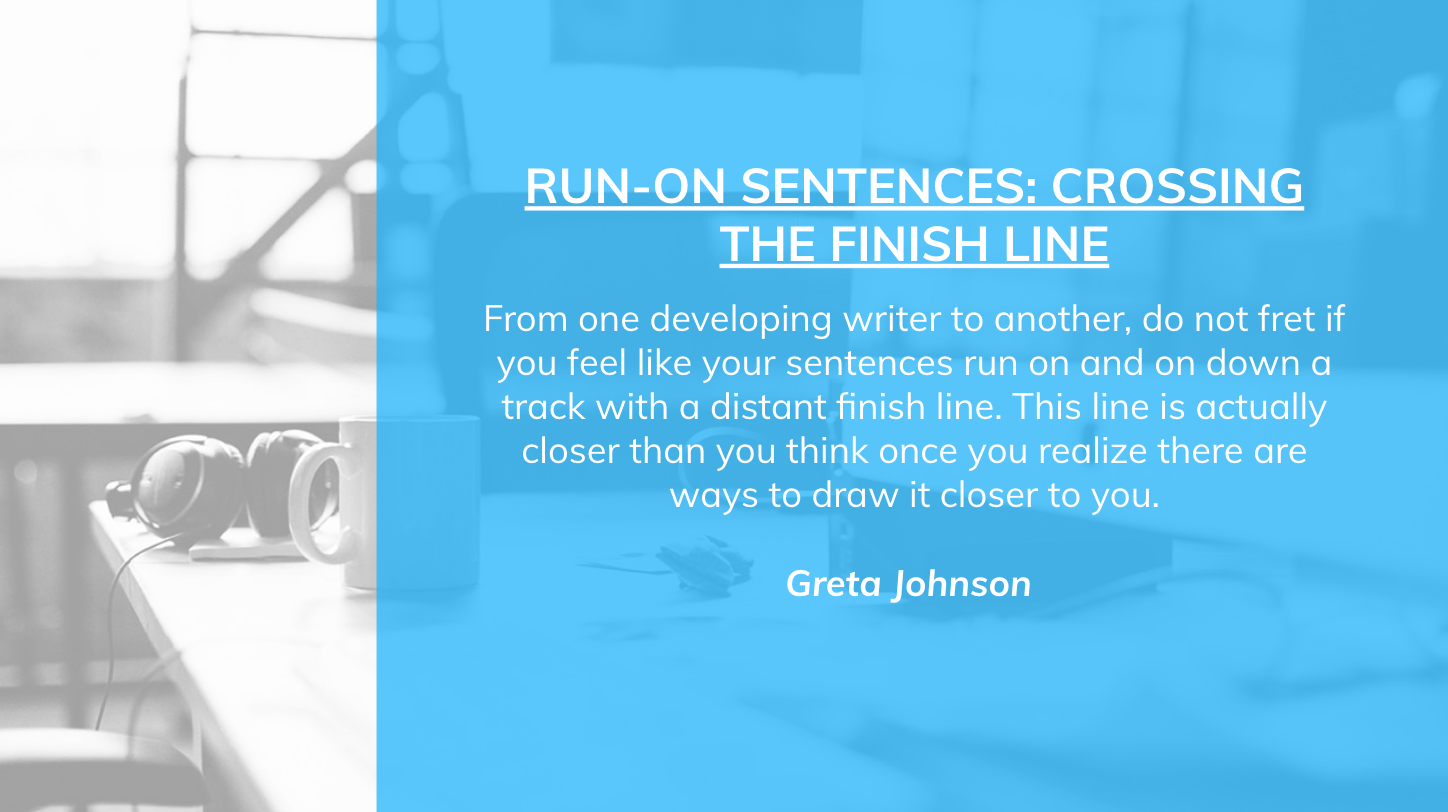 I am one of the many students who are prone to writing run-on sentences. Many that I compose feel like a never-ending race with the finish line far down the track. So, when the professor of my WRIT 350 course assigned a group project to present a grammar lesson, my partner and I chose this topic. As the saying goes, “teaching is the best way of learning,” so I figured that I’d be able to fix this issue in my writing while informing others about it.

I used to think that I needed to write in more concise sentences to avoid run-ons. However, as I did further research, I realized that going back to the basics of what makes up a sentence is the key to avoiding writing run-ons. And there are multiple ways to fix run-ons besides writing shorter sentences.

Sentences must include the following: a subject, a verb, and an expression of a complete thought. If these are not clear to you in your writing, then you likely have a run-on sentence.

There are many ways to correct a run-on sentence, such as these:

My partner and I put these principles to the test when we had to create examples for our peers to practice. Here’s how we did it:

First, we created a run-on sentence like this one: The fog was thick he could not find his way home. Then, we corrected the run-on using the methods described above:

Unfortunately, during our presentation our professor corrected one of the examples that I wrote (don’t worry, these ones are all correct J). I felt embarrassed at first, but soon brushed it off. I realized that I did not have to take on the role of an expert on the topic of run-on sentences and that this presentation was just as much of a learning experience for me as it was for the students watching.

From one developing writer to another, do not fret if you feel like your sentences run on and on down a track with a distant finish line. This line is actually closer than you think once you realize there are ways to draw it closer to you.

Greta Johnson is a sophomore double major in theatre and educational studies with a concentration in theory and practice. When she’s not doing homework – because she somehow has A LOT – she loves assisting tap dance classes in University City and being on the improv team on campus, Lazy Zipper.

One thought on “Run-on sentences: Crossing the finish line”

Sydney is a powerful business theme that provides a fast way for companies or freelancers to create an awesome online presence. Also, Sydney provides all the construction blocks you need to rapidly create an engaging front page.